The history of the Israelites shows how on-again, off-again they were with the Lord as they were led by kings that vacillated between walking in His ways and doing evil in His sight. Along the way, they allowed the gods of the of the lands surrounding them to permeate their lives. Even when they were in a season of walking with the Lord, they would still cling to the idolatrous practices that had become part of their way of life.

But there was one King who recognized what a mess they had gotten into. When Josiah became king and discovered the Book of the Covenant, he realized how far they had come from their covenant with the Lord, and he was determined to get back on track. All the way back on track. So he called the people together and read the Book of the Covenant to them, reminding them of how they were supposed to be living their lives before the Lord. Then he renewed the covenant to follow the Lord and to keep His commands with all his heart and soul. (2 Kings 23)

What Josiah did next was a crucial part that even the godly kings of the past had neglected to do. He went throughout the land and demolished every idol and idolatrous practice. He did away with them. He removed them and desecrated them. He tore down, broke down, pulled down, cut down and burned down. He smashed them to pieces and threw out the rubble. And then he ordered the people to once again celebrate the Passover, which had not been celebrated since the days of the Judges. He commanded them to once again remember how The Lord had moved mightily to set them free from captivity and to save them.

This story has a great life application for all of us. Living in a world surrounded by idols that other people worship (success, money, possessions, people, etc.) it is easy for us to pick up some of their practices and mix them in with our half-hearted devotion to God. But that is not what God wants. He wants all of our heart, all of our mind, and all of our soul. We must daily reflect on our relationship with the Lord. The moment we recognize that any other “gods” have crept in, we must do like King Josiah did and completely destroy them. We must smash them to pieces and throw out the rubble so that when we’re tempted to pull them back out, there won’t be any pieces left to salvage.

God does not want to share you. He has done far too much to allow you to put your trust in anything other than Him. He sent His one and only Son to set you free and save you. He has great plans for you that will glorify Him and sanctify you.

Focus on Jesus alone! Keep your mind fixed on Him. Take every thought captive to Him. Read the Bible to remind yourself of all of His ways. Pray constantly so that He can work in your life. Surrender it all to Him because nothing else that will give you peace in this life and hope for eternity. 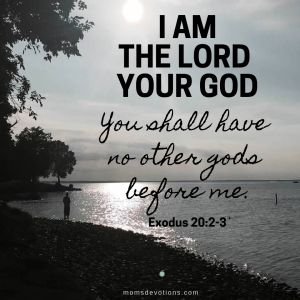 One thought on “God Does Not Want to Share You”